As the sole Royal City Track and Field Club competitor at the Elwood Wylie Meet in Nanaimo May 24-25, Jenevieve Patry-Smith held her own and then some in the throws events.

A highlight for 13 year old Patry-Smith was her shot put throw of 9.73m (just centimetres shy of BC Athletics’ Award Standard and second best throw in the province so far this year) which earned her gold in the event! She also accomplished silver in discus, javelin and hammer throw.

Representing their schools, six Royal City Track and Field Club JD athletes set out to compete against hundreds of elementary-aged competitors at the BC Elementaries’ Meet in Richmond May 24th.

A meet highlight for RCTFC athletes was Amanda Scott’s silver medal in the 13 year old girls’ category for her performance in a competitive 800m race! Scott took the lead early in the final lap and fought off her competitor until the final 125 metres of the race.

Many personal bests and winning performances were accomplished by all RCTFC athletes competing this weekend but of particular note is the BC Athletic Award Standard performances by Michelle Dadson in the 12-year old discus (26.04m) and by Milena Kalisch in the 11-year old 1000m (3:22:55). Both achieved gold for their outstanding accomplishments.  Kalisch also took silver in 600m and Dadson achieved 4th in shot put and 6th in long jump.

In the 9-year old boys’, Angus Steele won gold in the 100m dash and 7th in shot put, and in 10-year old boys’ Cameron Dewith won bronze for his performance in the 1000m.

In the 10-year old girls’ category, Emily Bowles led the pack in both the 600m and 1000m, taking gold in both. Other highlights included: Monika Arcadi taking 5th in high jump and 11th in her 600m, Kate Bowles winning 8th place in both 600m and high jump, Sydney Christiansen completing her first ever race in 60m hurdles, Grace Hodges taking 8th in 60m dash, 11th in 60m hurdles, and 12th in both 100m and long jump and Kaia Polanska-Richardson’s 5th in discus, as well as competing in 60m dash, 60m hurdles, long jump and shot put! The 10-year old girls relay team also took gold for the 4 x 100 relay! 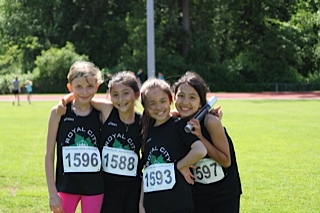 For 13-year old Royal City Track and Field girls, Jenevieve Patry-Smith won silver for discus, 4th for shot put and 6th for high jump,  Joelle Pinvidic took 5th in 200m and 9th in long jump and Amanda Scott finished up with a silver in 300m, 800m and long jump, bronze in 1200m and 4th for 200m dash. The girls won bronze in their relay.

A small but competitive Group of Five Royal City Track and Field Club JD athletes competed in their first club meet of the season. Not only were medals won but a JD Award Standard was accomplished as well.

Congratulations to this group for their accomplishments this past weekend!

A group of 11 Royal City Track and Field athletes competed at the Victoria Dogwood track and field meet May 10-11, competing in sprints, middle distance, long jump, hurdles, pole vault, long jump and throws events. The club’s athletes won an impressive 26 medals in all at the Victoria meet.

Emily Chilton took gold in the 2000m and silver in the 1200m for 14-15 year old girls, while Jenevieve Patry-Smith took home a pair of gold medals in discus and javelin, a silver in shot put and a bronze in high jump for the 13 year old girls’ category, and Kinsey Weir took silver in pole vault for 16-17 year old girls’ accomplishing 2.51m.

Well done and congratulations to everyone who competed in Victoria!

Through the rainy weekend, 12 Royal City Track athletes competed with many shining performances in the Norwesters’ Elementaries Meet.

For 12 year-old girls, Lauryn Savela took bronze in javelin, while Michelle Dadson accomplished top 8 performances in both shot put and discus and placed 9th in 80m hurdles. Sabine Girt took 5th place for both the 800m and 1200m. Emma Celle and Emma Dolman placed 17th and 24th respectively in 100m and Celle also took 13th and 11th for high jump and shot put.

In the 11 year-old girls’ category, Annette Scott placed 6th in the 600m and Milena Kalisch took gold for her performances in 1000m and discus, silver for 600m, bronze for shot put and 5th in the 200m sprint.

Congratulations to all 12 athletes for accomplishing personal bests and winning performances.

Royal City Track and Field Club athletes in the 14/15 year-old age category competed against about 50 other athletes in their zone May 3 at the Clement Track at Minoru Park, Richmond to qualify for a position to participate in the 2014 BC Summer Games to take place July 17-20 in Nanaimo, BC. Zone 4 trials include athletes residing in Richmond, Delta, Burnaby and New Westminster.

Royal City Track and Field Club athlete highlights include: 6th in 100m and 7th in 200m sprints for Prachi Brahmbhatt, 4th in 300m, 5th in 200m and 7th in 100m sprints for Emmanuel Dadson, gold in high jump and bronze in long jump for Devin Strome, bronze in javelin for Brianna Bates, silver in long jump for Jessica Klein, silver in javelin and bronze in 200m hurdles for Lauren Vanee, bronze in shot put for Tomas Ward. As the sole competitor in both the 1200m and 2000m Grace Fetherstonhaugh still ran but only against the clock and so took gold in both to fulfill trial requirements and be considered for selection to the zone team.

Based on results from the trials meet, just 24 athletes total will be selected to compete for Zone 4 at the 2014 BC Summer Games to happen in July. 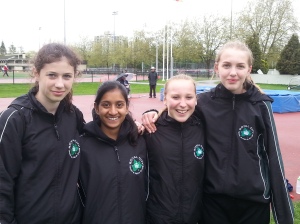 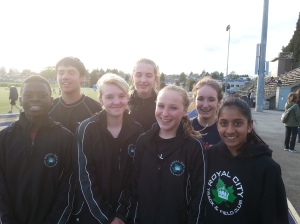 We acknowledge the financial assistance of the Province of British Columbia

Royal City Track in the News

Port Coquitlam Javelin Thrower Has His Sights Set On The Olympics

Stewart-Barnett Strides to Gold for Canada

Hyacks Gracious Grace In Love With The Thrill of The Race

Trio of Thirds at Nationals

RCTFC athletes at the BC High Schools – New Westminster Record

Medal at the BC Games

RCTFC Wins Big at BC JDs