Grade 11, New Westminster Hyack athlete and Royal City Track and Field Club member, Grace Fetherstonhaugh, set a new high school record in the women’s 1500m steeplechase with a blistering gold medal winning time of 4:54.81, breaking the old record of 4:58.85 set in 2011. Grace’s gold medal capped off a triple medal performance at the 2017 BC High School Track and Field Championships in Langley’s McLeod Athletic Park this past weekend. She also won a pair of bronze medals in the 1500m in a personal best time of 4:32.80 and the 3000m in a time of 9:51.03.

A Royal Flush of Medals at the BC High School Championships 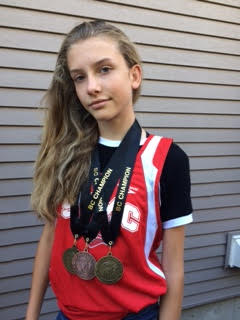 Grace wasn’t the only medal winner at the BC High School Championships. Grade 8 St. Thomas Moore athlete, Kate Stewart-Barnett, was the hardware Queen, running away with three gold medals in the 1500m in a time of 4:50.26, the 3000m in 10:37.02, and as part of the St. Thomas Moore 4×400 relay team. She took home a fourth medal in the high jump after capturing the bronze with a jump of 1.50m, which is even more impressive when you consider she jumped the height moments after completing her 1500m gold medal performance.

Coming in with a double medal performance was Terry Fox, grade 11 athlete, Jv Patry-Smith, who won a pair of senior division bronze medals in the shot put with a personal best put of 10.35m and the discus with another personal best throw of 34.78m. Jv had a trio of personal best performances by also making the finals in the senior girls javelin with a throw of 40.41m, placing her fourth.

There were also personal best performances from Finnley Cookson in the senior boys pole vault, and Kaitlyn Hanger in both the high jump and hammer throw.